Three cheers for Arianna Huffington. Whatever you might think of the quality of her journalism (which is uneven, but increasingly original), you have to give her credit for making money, expanding, and hiring people.

Her latest move is to create an Italian-language version of HuffPo. This is her fifth, following rollouts in Canada, Britain, France and Spain. (What’s wrong with her native Greece?) Up next: Germany, Japan, South Korea, India, and Brazil.

L’Huffington Post lined up four prominent introductory advertisers: the leather goods company Tod’s, the carmaker Citroën, the energy company Eni and the telecommunications provider Wind. Each of the partners has invested 1 million euros, or about $1.3 million.

Is Rupert Murdoch hearing footsteps yet?

A prayer for journalists?

I was in temple today, accompanying my family to services for Yom Kippur. Part of the service included this passage, which I thought could serve many journalists well:

For failures of truth, O Lord, we ask forgiveness.

For passing judgment without knowledge of the fact,

and for distorting facts to fit our theories,

For deceiving ourselves and others with half-truths,

and for pretending to emotions we do not feel. . .

~Happy new year. May you be inscribed in the Book of Life.

I’m not sure why, but I am finding it hard to sort out the issues in the flap over CNN’s use of the diary of the late U.S. ambassador J. Christopher Stevens.

I guess it’s because I cannot reconcile these two imperatives:

1. Never violate someone else’s privacy — by, for example, reading a private diary. As a sporadic diarist myself, I know that I would be appalled by any reading of my diary that I did not personally approve. Private is private. If CNN

were to cover a fire or explosion at a U.S. Post Office, would the reporter have a green light to start opening mail and reading private correspondence?

2. Never withhold useful, verified information from your audience. If you’ve got it, use it. CNN did not divulge any information that the average person would consider personal or intimate, and it did find other sorts of observations in Stevens’s diary that have a bearing on important public issues. What if CNN found the diary of the leader of Iran (who

can spell Ahmadinejad?) and therefore could say definitively what his intentions are?

Please leave your comments below (with your full name, please).

Some worthies from today’s news:

—The Times has a piece that toys with what might be called the “journalistic Heisenberg principle.” That is, based on the popular view of Werner’s Heisenberg’s Uncertainty Principle, it would appear that a reporter cannot be present at a political event without changing the event. In any case, it’s always fascinating to hear what politicians say when they think they are off the record.

—The Times has a piece about the final round of releases of the secret tapes that JFK made in the Oval Office. Disclaimer: Kennedy had an “on” button (unlike Nixon), so the conversations that were recorded were those that he chose. Furthermore, these tapes have passed through the hands of the family and the staff at the Kennedy Presidential Library, so there is no way of knowing what is not in there. Still, they are the best we are going to have.

—The Globe has a piece that addresses the question: who is on the receiving end of all the money spent on political advertising? It’s the owners of the thousands of TV stations around the country, of course. Not all of the prosper equally, of course. Much depends on whether they are in a “battleground” state. Also, they may not prosper as much as you might think: Since Congress started regulating broadcasting in 1927, lawmakers have rigged the rules in their favor. As in this excerpt from the Globe:

By federal mandate, candidates for president and Congress receive preferential treatment when booking advertising time, and stations must give equal airtime to each side of a race. Candidates can also buy television advertising time at a discount from the going commercial rate. The result all too often: back-to-back political spots which can bump more lucrative commercial advertising.

Leave it to politicians to write the rules.

When did the term “professor” become an epithet?

U.S. Senator Scott Brown, R-Mass., seems to use it that way in his campaign against challenger Elizabeth Warren. As can be seen in the wordmap below, created by the Boston Globe, Brown never misses a chance to use that title. What is hard to tell from the graphic, though, is Brown’s tone and demeanor. He usually delivers the “professor” line with a smirk, as if he knows he’s blowing a dog whistle intended to reach every anti-intellectual voter in Massachusetts. This from a guy who has benefitted from the teaching he received from many professors. After all, he has a b.a. from Tufts (cum laude) and a Juris Doctor degree from Boston College Law School. It takes a lot of nerve for him to run a campaign in which he mocks higher education (which is also a major industry in the state he wants to represent).

As someone who worked very hard to become a professor myself, I guess I take this one a little bit personally. Where I come from, in Medford, we’d call someone like Brown cute. The way we used it there, it was not a compliment. 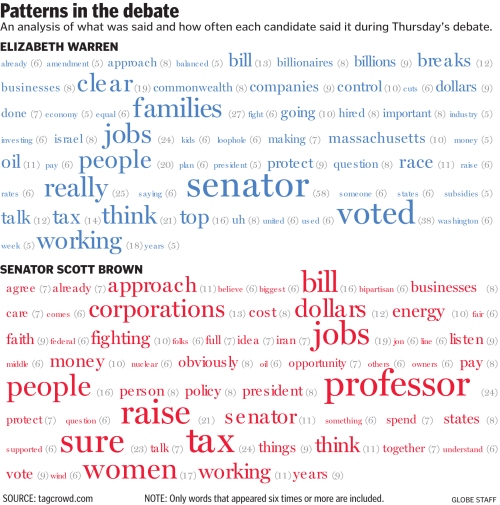 In the coverage of the political debate over who pays taxes in this country, most journalists seem to be overlooking some critical distinctions. Mitt Romney (and most conservatives) focus on the federal income tax. But that is only one tax among many. In the case of many wealthy people, it’s the primary tax they pay, and it is really a tax on the performance of the capital they control.

Most typical Americans earn wages or salaries, on which they pay the payroll tax. Most of them pay it willingly. They do not mope around complaining that that damn payroll tax is sapping them of their will to work harder. Most people accept and just wish their pay was higher (even though that would mean paying more tax; most people “get” this).

When Mitt Romney released his 2011 tax return, it showed — no real surprise here — that his income from wages was zero. Therefore, he did not owe or pay any payroll tax in 2011. That does not make him a deadbeat, just someone who is lucky to live off his investments.

[Another difference between the payroll tax and the income tax: the payroll tax is usually withheld by the employer and never seen by the worker. The income tax often falls on unearned income (from investments, for example), which is not withheld. As a result, rich people often have to write a check to the government for large amounts of money that they once had in their hands. This contributes mightily to the feeling they seem to have that it’s “their” money and the government should keep its hands off.]

One more thing: The payroll tax is not the only tax Romney does not pay. He is not pulling his weight with the alcohol tax or the tobacco tax either!

So, British regulators have blinked in their showdown with Rupert Murdoch and decided that the media mogul can go ahead and stay in the business of broadcasting in the U.K., notwithstanding the fact that Murdoch’s employees have been charged with dozens of crimes and thousands of violations of privacy. The regulators declared that he met the British legal standard of being a “fit and proper” person.

The British Office of Communications found, after a lengthy investigation, that the officials in charge of Murdoch’s broadcast operations (BskyB) did not know about the shenanigans and crimes being carried out by reporters and editors at Murdoch’s newspaper properties, according to the Guardian.

And now that that’s out of the way, Rupert Murdoch seems poised to elevate his son James to head up his flagship (and lucrative) Fox TV channel in the United States. Question: does our FCC consider James Murdoch “fit” or “proper”? That’s not the standard for broadcasting executives in this country, of course. Maybe more germane is the question of how long James Murdoch can avoid being a convicted felon?

It was the only decision they could have made, but credit New York Times executives with deciding to ban the pernicious practice of “quote approval.”

In an announcement made Thursday, the paper said it would no longer allow its reporters to grant their sources the power to approve their own quotes before they appear in news stories. The Times was slow in figuring this out, but a right decision is always welcome.

. . .starting now, we want to draw a clear line on this. Citing Times policy, reporters should say no if a source demands, as a condition of an interview, that quotes be submitted afterward to the source or a press aide to review, approve or edit.

That should have been self-evident.

Here is a wonderful tribute to Rachel Carson’s ground-breaking environmental reporting, Silent Spring. The book was published on Sept. 27, 1962, just a few months after it first appeared in (where else?) The New Yorker. 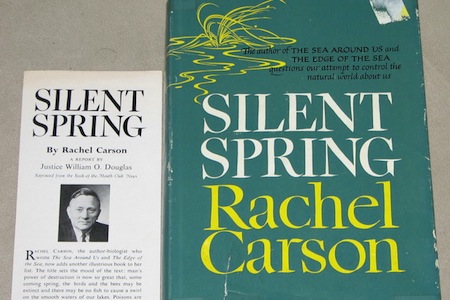 Today’s Times brings the news that David Carr has joined the chorus of journalists denouncing the journalistic practice known as “quote approval” (which consists, essentially, of allowing your interview subjects to clean up their comments before publication or — in extreme cases — to recast what they said altogether).

All I can say is, welcome aboard this bandwagon.

Here’s my comment: In nearly 20 years at the AP and the Washington Post, I must have quoted hundreds of people, maybe thousands. Based on that experience, I can say that almost no one ever asked for quote approval (and no one got it) and nobody ever said I mis-quoted them. I used a tape recorder, but only rarely. I took notes like mad, and I only ran with those quotes I was sure of. This is not rocket science. And it’s not that I was any kind of paragon. Those were just the rules of the game.

The standard at the AP, but the way, was very clear: Every word that appeared inside quote marks must have been said by that person, in that order, with nothing added or left out.

Call me old-school, but that’s exactly what I expect when I read another journalist’s work. If I’m not getting that, I might as well be reading fiction, or P.R.