So nice to see that Fox News founder Rupert Murdoch has found a place to rest his head.

Since Wendi got the triplex on Fifth Avenue as part of the divorce, Rupert has not exactly been facing homelessness, but still. . . He has landed a rather special spot: the top four floors (take that, Wendi!) at One Madison. (For those planning to drop by, the entrance will be on E 22nd, between Bway and Park.) That’s a lot of stairs for a guy his age, but apparently it’s worth it to be able to say you’ve got a quadriplex.

According to the Times, he paid more than $57 million for the new condo. Ah, to think of the money to be made in mass media!

Wikipedia: The building under construction in September 2008; the Met Life Tower is in on the left

Should Murdoch be able to buy the L.A. Times?

His latest target is the L.A. Times, the paper that the conservative Otis and Chandler families used to spearhead the phenomenal growth of LA (and, not incidentally, their family own’s fortunes). A story in today’s NYTimes provides an

Here’s the situation: Like most big newspapers, the LATimes is in financial trouble, so its owner (the Tribune Co.) wants to sell it. One of the few buyers of newspapers is Rupert Murdoch.

Here’s the problem: Murdoch already owns two television station in Los Angeles, KTTV and KCOP. Like all holders of broadcast licenses in the United States, the two stations are subject to regulation by the Federal Communications Commission. Decades ago, the FCC idealistically promulgated rules that limit the ownership of tv and radio stations and that limit the “cross-ownership” of broadcast entities and newspapers in the same market. The idealistic impulse was to try to keep ownership diverse and prevent anyone from monopolizing the market for news and opinions in a given part of the country.

Here’s the wrinkle: Murdoch runs his News Corp. by basically using his many profitable broadcasting properties (starting with Fox TV) to subsidize his many money-losing newspapers (starting with the New York Post). His next step is to divide his company in two: a broadcasting division and a print division. If he pulls that off, he may be able to skirt the FCC rules.

Finally, it’s here: the electronic version of my book about the history of U.S. journalism, Covering America.

Just in time for the anniversary of the rollout of the hardback, this prize-winning book is now available in all major formats:

Apple iBook, (This is the format I am checking it out on, and it looks great.)

I am very pleased because I know that some folks have been waiting for the e-book. These formats make the book quite a bit cheaper and dramatically lighter! For people who don’t feel drawn to the ~$50 hardcover, here’s your chance to read Covering America. The book won the 2012 Prose Award for Media and Cultural Studies, and it has been selling well and drawing rave reviews (except for one stinker on Amazon — sheesh).

Enjoy it, and write to me about your reactions. You can comment here, or email me: chrisdaly44@gmail.com

It’s hard to see how this is over.

And this one is definitely not over. (Here’s the Guardian’s version, which is a bit clearer.)

And this one won’t be over until you-know-when.

CONGRESS SHALL MAKE NO LAW ABRIDGING THE FREEDOM OF THE PRESS.

It has worked here (on the whole) since 1791. As the Brits grapple with the fallout from the multiple disasters in their news media inflicted by the minions of conservative media mogul Rupert Murdoch, they might want to consider doing nothing.

Keep calm and carry on and all that. Not to be missed: The Guardian‘s comprehensive coverage. 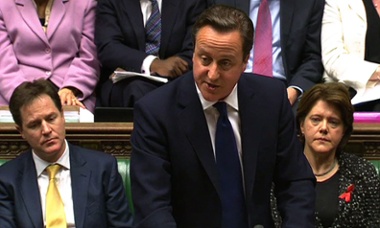 Keeping up with the Murdochs

Now, British authorities are saying they plan to bring bribery charges against former top-ranking editors in the Murdoch media empire.

I’m confused: I thought these people were so intimidating and tight with the powers that be in Britain that they would not have to pay for anything. Sheesh.

Paying is so tacky.

No matter. Somehow, the troubles in Britain seem to have done little to slow down the News Corp. juggernaut. The Times says Murdoch (still never convicted of a felony in the U.S.) is shopping for new companies to acquire.

Now that the U.S. election is over, maybe we will be hearing from the Justice Dept about the Foreign Corrupt Practices Act.

So, British regulators have blinked in their showdown with Rupert Murdoch and decided that the media mogul can go ahead and stay in the business of broadcasting in the U.K., notwithstanding the fact that Murdoch’s employees have been charged with dozens of crimes and thousands of violations of privacy. The regulators declared that he met the British legal standard of being a “fit and proper” person.

The British Office of Communications found, after a lengthy investigation, that the officials in charge of Murdoch’s broadcast operations (BskyB) did not know about the shenanigans and crimes being carried out by reporters and editors at Murdoch’s newspaper properties, according to the Guardian.

And now that that’s out of the way, Rupert Murdoch seems poised to elevate his son James to head up his flagship (and lucrative) Fox TV channel in the United States. Question: does our FCC consider James Murdoch “fit” or “proper”? That’s not the standard for broadcasting executives in this country, of course. Maybe more germane is the question of how long James Murdoch can avoid being a convicted felon?

Question: will we ever see Murdoch in handcuffs, or slinking into a courthouse with a trenchcoat over his head?

What is becoming clear, media analysts say, is that the push-the-legal-limits newsroom culture that has gone untrammeled for years at the British tabloids and has even found its way into some of the country’s upmarket broadsheets, including Mr. Murdoch’s Times and Sunday Times, could be a casualty of a new culture of caution.

Already, some who work at British newspapers say, the scandal has had a chilling effect on newsrooms, with editors, reporters and their proprietors less eager to trumpet splashy exposes that might involve, or be perceived to involve, less than ethical standards of news gathering.

One tabloid journalist, who insisted on anonymity because of concern for his job, lamented what he called the end of the “anything goes” era. “Before, it was a case of ‘Don’t tell me how you get it, just get it,’ ” he said. “Now things are looked at differently.”