Even from the grave, media mogul William Randolph Hearst continues to make headlines, reshape the landscape, and build edifices. Turns out, one of the rockpiles he bought in Europe was never re-assembled but just lay in a shed in San Francisco’s Golden Gate 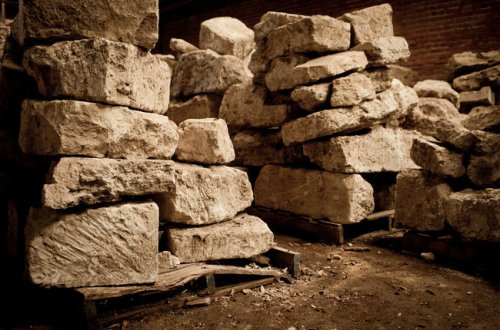 The house’s stones were bought in Spain by William Randolph Hearst in the 1930s, then abandoned in San Francisco’s Golden Gate Park for decades.
(Max Whittaker for the NYT)

Park. Until, that is, a band of monks and a California artisan brewer (is there any other kind inthe Bay Area) teamed up to put all the pieces back together again.

A rare feel-good story involving Hearst. (Actually, there is a missing feel-bad angle: these stones belong in Spain and should have been repatriated. Hearst, the cultural imperialist, should not be allowed to get credit for this.)

The Hearst Corp has decided to give itself a big birthday — 125.

That is predicated on the fairly arbitrary starting point of March 4, 1887, the date on which young William Randolph Hearst took over the management of his father’s newspaper, the San Francisco Examiner. It’s as good a date as any, I suppose, although it was another two decades before WRH really started building the media empire that still endures. Hearst, naturally, looms large in my new book on the history of journalism, Covering America, since his career lasted from 1887 almost to his death in 1951.

Fun fact: Hearst opposed U.S. intervention in WWI, and he came under attack from Wilson and his supporters. On the defensive about his loyalty, Hearst literally became a flag-waver: he ordered the editors of all his newspapers to print little American flags on the upper corners of every front page.

Don’t miss the great visuals in the slideshow and video in the company’s anniversary page. Hearst Corp., by the way, is one of the biggest privately held media companies in the U.S., owning everything from TV stations to Cosmopolitan and O magazines.