Finally, under court order, the Obama administration has divulged its legal rationale for killing Americans abroad without trials, charges, or even arrests. That reasoning appears in a contested legal memo written four

years ago in the Office of Legal Counsel offering arguments that would justify using a drone to take out Anwar al-Awlaki — who was an American citizen living (hiding?) in Yemen and fomenting attacks against you and me and our country.

Leaving aside (for the moment) whether al-Awlaki deserved to die in a drone strike, it was an offensive outrage that the Obama administration not only had a secret plan for killing Americans abroad but they also had a secret rationale for doing it, and they said no mere citizen could even read those arguments. Now, we mere citizens can read them for ourselves.

You can find the court ruling ordering the memo’s release and the arguments themselves here, thanks to the Times. That is, we can sort of read the memo. The ruling by the 2nd Circuit Court of Appeals allowed the government some wiggle room so that officials could redact (i.e., “censor”) some parts that pertained to secret stuff the government knew about al-Awlaki through the fruits of spying on him. That makes a certain amount of sense, I guess, but any time that the government is allowed to redact its own documents, you have to wonder what’s missing.

In any case, the president should long ago have made this argument himself, in public. If he believes in it, then he owns it. It is his duty to protect and defend the Constitution and, therefore, to show why his actions are in conformance with his understand of the Constitution. If he makes the case and the people accept it, fine. If he makes his case and the people reject it, then he’s got a problem. But there is no reading of the Constitution that authorizes the president to carry out a secret assassination program and not tell anyone about it.

For now, I will pass on the question of whether al-Awlaki had it coming and whether Obama has a legal leg to stand on. I want to read the document and think it over. The policy might be acceptable, but what was not acceptable was the secrecy.

Meanwhile, kudos to the Times‘ Charlie Savage and Scott Shane, who are named among the plaintiffs who pried this decision out of the courts, along with the Times itself and the ACLU. No matter what we each think about the president and his policies, these plaintiffs have done the whole country a service. Thank you. 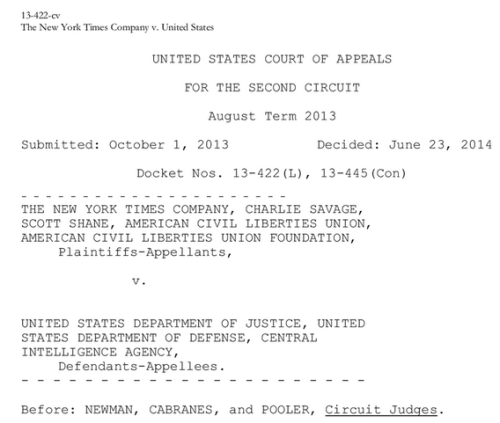