Rove on Iraq: “We create our own reality”

As U.S. policy-makers argue over what to do next in Iraq (How about doing nothing?), it is worth recalling how this all came about. One source of the current situation that is worth recalling can be found in a rare moment of candor in the Bush White House. Thanks to the estimable journalist Ron Suskind, we have a glimpse into the interventionist mindset that propelled U.S. forces into ground action in Iraq. In a New York Times magazine piece from October, 17, 2004, Suskind reported on a conversation he had had in 2002 with a person he could not name but could only identify as a “senior adviser to Bush.” Later, Suskind was able to reveal the identity of that source: turns out, it was Karl Rove, the top political brain in the entire Bush operation.

The aide said that guys like me were ”in what we call the reality-based community,” which he defined as people who ”believe that solutions emerge from your judicious study of discernible reality.” I nodded and murmured something about enlightenment principles and empiricism. He cut me off. ”That’s not the way the world really works anymore,” he continued. ”We’re an empire now, and when we act, we create our own reality. And while you’re studying that reality — judiciously, as you will — we’ll act again, creating other new realities, which you can study too, and that’s how things will sort out. We’re history’s actors . . . and you, all of you, will be left to just study what we do.”

This is why we need journalists — not just to “study what they do,” but to hold them accountable. 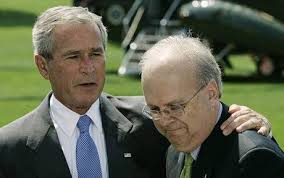 One response to “Rove on Iraq: “We create our own reality””