Get to know about a new use of narrative

Here’s an update about the Story in the Public Square project, which is going on in Rhode Island (and in which I have a small role). From a blogpost about a recent planning meeting:

by Mia Lupo on September 11, 2014 in News, Story in the Public Square
By Alisha A. Pina

An Emmy Award-winning producer and director.

An author and Bryant University professor who has archived the wartime letters of countless women.

These are three of the about two dozen dedicated and diverse members of the Story Board, a group advising The Providence Journal and Pell Center leadership with its Story in the Public Square initiative. Since its inception in 2012, there have been two day-long conferences that studied, celebrated and practiced storytelling in its many forms.

The Story Board, which was created after a coffee house conversation, met for the first time Wednesday at The Providence Journal to brainstorm for the third annual Story Day conference being planned for the spring of 2015 — and future projects.

Miller is leading the initiative with Pell Center Executive Director Jim Ludes, who on Wednesday likened the Story Board to chocolate and peanut butter because it fits so well with enhancing Story in the Public Square.

The still-being developed theme for Story Day 2015 is music — its abilities to heal, narrate emotion, bring strangers together and move past global boundaries.

Suggestions from Story Board members include discussing the origins and necessity of black gospel; two types of classical music in India; how the hearing impaired still enjoy music; the importance of arts and music education in schools; and creating a block of time for young musicians to jam with a seasoned artist (s).  There could be bands, dancers and solo artist between lively panel discussions.

Getting additional youth and community members involved was also emphasized, as well as topics for the annual youth contest.

Said Miller, “this is not a closed club.”

Providence Journal Staff Writer and Columnist Alisha A. Pina is a member of the Story Board, a culturally, ethnically and creatively diverse advisory board with representation from every Rhode Island college and university and members from the broader community. Meet all of the Story Board members at www.salve.edu/story-board

More information about Story in the Public Square can be found online atwww.publicstory.org; on Facebook at www.facebook.com/StoryInThePublicSquare; and by following @pubstory on Twitter. 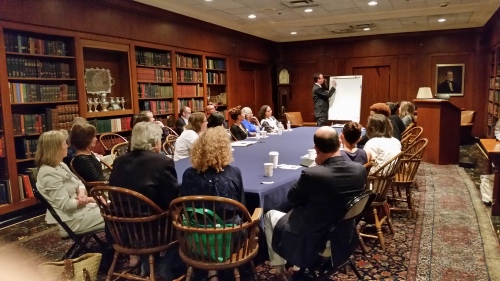