BU Prof: The Benghazi tragedy was caused by the CIA station chief

Get ready: the Benghazi controversy is about to get a big new dose of fuel. My friend and B.U. colleague Mitch Zuckoff has a new book coming out next week that tells the story of the tragic assault on the U.S. compound in Libya from the perspective of five American commandoes who were there. The five men have teamed up with Zuckoff to write their 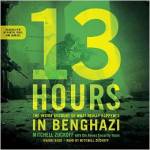 The release of the book is already reviving the arguments over who was to blame for the deaths of U.S. Ambassador Chris Stevens and three others during the assault on the U.S. diplomatic compound in Benghazi in 2012. Most Republicans (including the Republican Party news outlet known as Fox News) are hoping to lay the blame on Hilary Clinton, on the grounds that she was U.S. Secretary of State at the time and therefore responsible for every bad thing that happened anywhere in the world during her entire tenure. The Republicans would like to use this tragedy to damage her politically as she gears up to run for president in 2016.

Most Democrats, meanwhile, would like to just see the whole thing disappear.

Most journalists, like Mitch, would like to get to the bottom of exactly what happened. Operating in a fact-based world, journalists (and historians, for that matter) need to establish a reliable, factual sequence of events before we can even have a political discussion. That’s what has been largely missing. Based on knowing Mitch Zuckoff for almost 30 years and working with him when we were both reporters at the AP and working with him since we have both been journalism professors at B.U., I can say that I would expect his version to be definitive.

The debate is flaring up, as you can see from these accounts from MSNBC, the Washington Post, and the NYTimes (which somehow “obtained” an advance copy of Mitch’s book). Fox News jumped with a “special report” by Bret Baier. The book’s release also just happens to coincide with the start of hearings into Benghazi by a special House committee. Stay tuned.