Most important media story of the year?

this oneIt may well turn out to be , announced with little fanfare a few days ago:

What that means is that the NYTimes newspaper has become profitable again — so profitable that the folks who run the company feel they have enough cash to pay their stockholders again. Most importantly, that means that the cousins of the current publisher, Arthur Sulzberger Jr., will once again benefit financially from owning the NYT Company. For the past five years, that has been a losing proposition for them. The value of their shares of stock crashed, and the stock stopped paying a dividend.

Cousin Arthur has been in the same boat. But in his case, he at least has the fun and challenge of trying to run the world’s greatest news operation every day. The others, who are mostly not involved with the paper, had to just sit and wait. How long they would be content to do so was a question of some urgency for those who care about the Times. 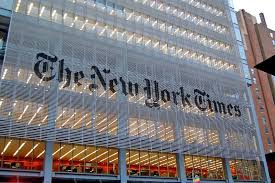