The dinosaurs of old media still shake the earth

Is all the coverage of Rupert Murdoch’s play for Time Warner a bit of an over-reaction?

The NYTimes, for example, cleared the decks and went all-in, devoting nearly a double truck of today’s Business section to coverage of an 83-year-old business mogul who wants to take over a 91-year-old media company.

So, it turns out that Murdoch wants to own the company that is a distant relative of the company founded in 1923 by Henry Luce, one of the earliest of the modern media moguls. Luce created TIME magazine with his co-founder and frenemy Briton Hadden, and in its day, TIME was the cool new thing. Over the decades, Time Inc. added more magazines that became household names — Fortune, Life, SI, People, etc. As I wrote in my book Covering America, Luce used his midas touch with magazines to become a wielder of great influence in American politics, culture, business, and foreign policy. In the late 20th Century, Luce’s successors made a series of mergers and acquisitions that transformed a magazine publisher into a multimedia giant. More recently, the company’s executives decided to spin off the print properties, leaving Time Warner as a company with a desirable core of television and film content-makers. That’s what Murdoch wants.

Murdoch himself went through a similar process of corporate cell division last year, dividing his News Corp. into separate print and video divisions. He is using his profitable new company, 21st Century Fox, to gobble up Time Warner. If he succeeds, as he might, it would also represent the final victory of 20th Century Fox movie studios founder Daryl F. Zanuck over his great Hollywood rival, Jack Warner. (Ironically, Zanuck learned the business at Warner Bros., making his bones with “Rin Tin Tin” but left after creative differences with Jack Warner over the making of “Baby Face.”)

It’s hard to find anyone to root for in all this. 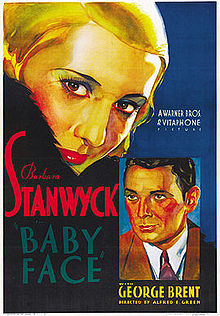 The re-making of the news media

We are living through a period of great flux in the news business. There are new ventures, new hybrids, new devices for gathering and disseminating information, documents, and polemics. It’s a treat to have a front-row seat (Goodbye, Google Reader! Hello, Feedly!), but it can be disorienting at times.

To wit: the decision by the mighty Time Warner media conglomerate to abandon its shiny, still-new namesake building at Columbus Circle in Manhattan and decamp to a still-unfinished tower in a lower-rent

district the developers refer to as Hudson Yards. (Does anybody really call it that? It’s really a vast wasteland on the Far West Side between Chelsea and Hells Kitchen, but it is slowly becoming a new media hub within Manhattan.)

But not to be missed is a more powerful trend sweeping through much of Big Media: the break-up of many of the big conglomerates. At Time Warner, at News Corp., and at Tribune Co., the same de-conglomeration process is underway: the division of those big companies into a print division and a (for lack of a better word) video division.

–Time Warner is spinning off its magazine division, which has been the cornerstone of the Time empire since Henry Luce founded Time magazine in 1923.

–News Corp. took out a double-truck ad in the NYTimes on Monday to signal its separation into two divisions. One made up of the Wall Street Journal, the NYPost and many, many other newspapers along with some magazines, almost all of which lose money. The other is a new company (called “21st Century Fox”) made up of the highly profitable television, cable, and movie-making subsidiaries. (The new video division began trading on the stock market on July 1; shares opened at $29 and basically stayed there all day. The new print division has not started trading yet.)

–Tribune Co., which traces its roots to the Chicago newspaper empire founded by Joseph Medill and taken over by his grandson, Col. Robert R. McCormick, announced this week that it is going to spend $2.7 billion to buy 19 local television stations around the country. At the same time, Tribune Co. is trying to sell “some or all of its newspaper properties,” including the cornerstone Chicago Tribune, according to a story in today’s NYT business section.

–The New York Times Co., which traces its roots to the founding of the New-York Daily Times newspaper in 1851, began selling off its broadcast units about six years ago and completed the process a few years later. The Times Co. is apparently pursuing a strategy of shrinking to its core business and trying to defend the castle keep with a paywall.

The big open question: What will any of this mean for the quality of the journalism that is carried out by these companies?

When the horses run today in the Belmont Stakes in New York, there will be some empty seats in the press box. Just days before the running of the prestigious horse race, the New York Post fired all its racing reporters, according to a story in the Daily Racing Form.

Here’s my guess: the Post, which is owned by Rupert Murdoch’s News Corp., was included in the print half of the company that Murdoch recently spun off in order to protect his more-lucrative broadcasting properties from the legal and financial catastrophes that his print properties have brought upon themselves. So, among the money-losing print properties, the strategy seems to be to slash costs by getting rid of reporters.

That seems like a bit of egregious cruelty. They shoot horses, don’t they?

[A hat-tip to my brother, Ned, for pointing me to the Racing Form.]

“Not a Fit Person”

Well, now it’s official. Something that many people have thought for a long time is now part of the findings of a British parliamentary report: Rupert Murdoch is “not a fit person” to run a globe-straddling, influence-buying, phone-hacking, official-bribing media conglomerate.

Actually, the report released Tuesday may not be Murdoch’s biggest problem. He is already under investigation in the United States as well. Murdoch became a U.S. citizen in the mid-1980s, a move that facilitated his move into American broadcasting (since U.S. law requires that broadcasting remain in the hands of U.S. citizens). Perhaps more serious for Murdoch is the fact that his News Corp. (parent company of the British unit that is in trouble in Parliament) is a U.S. corporation, registered on the New York Stock Exchange. That means that News Corp. is subject to all the laws and regulations of the United States — including the Foreign Corrupt Practices Act. That law, dating to the 1970s, forbids U.S. companies from using their assets to pay bribes to officials in other countries. On the face of it, that would appear to make it a crime in the U.S. for News Corp. employees to do what they have already admitted under oath in Parliament: for years, they paid British police police officials for tips about their investigations.

If I were Murdoch (or even a shareholder in News Corp., which operates Fox News and the Wall Street Journal, among many others), that’s what I would be really worried about. 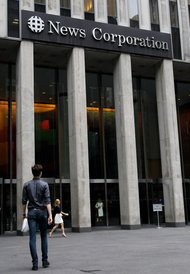 Or clever but mean?

You be the judge of this satirical screenplay in today’s NYTimes magazine that imagines the Murdochs going to visit a family therapist.

It’s by Etan Cohen, (not Ethan Coen — one of “the Coen brothers”). ETAN is a screenwriterwho got where he is by the traditional route — go to Harvard, join the Lampoon, sit around and think up funny premises. Someone’s got to do it.

James Murdoch, son of media mogul Rupert Murdoch, is set to appear again Thursday before a committee of the British Parliament to answers about the behavior of Murdoch employees in Britain.

The NYTimes has a preview today, along with a couple of sidebars.

But the most extensive coverage I have found is in the Guardian, which seems determined to try to topple the entire Murdoch empire.

He has already been asked so many questions on so many subjects that it seems unlikely he could avoid making mistakes and possibly worse. He may want to bring a bodyguard (like his dad’s wife, Wendi — shown below waging a counter-attack against a prankster who tried to “pie” Rupert during an earlier round of Parliamentary hearings.) 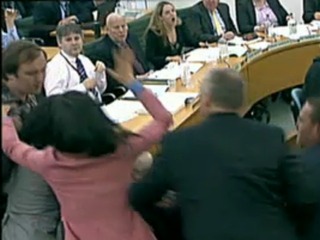