Be you.com (but don’t expect you book publisher to help much)

There are two interesting pieces about the media businesses, but they appear in different sections and were probably not planned as a package. Nevertheless, these two articles are more informative if read together.

First, I recommend David Carr’s celebration of the business acumen of the recently departed film critic Roger Ebert. Carr points out that Ebert consistently experimented with new outlets for his work and did not shy away from new technologies. In the process, he became a brand name and added to our vocabulary. (Whether he really elevated film criticism is another question)

Extra credit: Carr discovered (remembered?) that Ebert played a key role in the success of another media entrepreneur — Oprah Winfrey. As I explain in my recent book Covering America (p 424 in the print edition), it was Ebert who opened Oprah’s eyes to the power of owning a stake in your own brand. Taking his advice, Oprah went from being a media employee to being a media mogul. 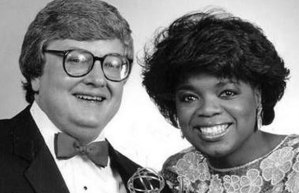 Ebert and Winfrey even dated for a while in Chicago.

All that said, Carr’s column should be read in conjunction with an op-ed by the famous (and wealthy) lawyer, legal novelist, and president of the Authors Guild, Scott Turow. In his op-ed, Turow documents the many ways in which publishers and book-sellers worldwide are turning their ingenuity to finding ways to NOT PAY WRITERS. This is a very bad thing, under any circumstances and in any medium. It also undermines the effort of every writer, like Roger Ebert, who wants to escape the hamster wheel of working for someone else and to live independently on the earnings from their own writing (or painting, or photography, or film-making or any creative venture).

And there are many e-books on which authors and publishers, big and small, earn nothing at all. Numerous pirate sites, supported by advertising or subscription fees, have grown up offshore, offering new and old e-books free.

The pirates would be a limited menace were it not for search engines that point users to these rogue sites with no fear of legal consequence, thanks to a provision inserted into the 1998 copyright laws. A search for “Scott Turow free e-books” brought up 10 pirate sites out of the first 10 results on Yahoo, 8 of 8 on Bing and 6 of 10 on Google, with paid ads decorating the margins of all three pages.

If I stood on a corner telling people who asked where they could buy stolen goods and collected a small fee for it, I’d be on my way to jail. And yet even while search engines sail under mottos like “Don’t be evil,” they do the same thing.

Yikes. Someone should get him a lawyer!

Our wacky legal system at work.

Here is what our founders wrote in the Constitution (Article 1, Sec. 8):

The Congress shall have power . . . to promote the Progress of Science and useful Arts, by securing for limited Times to Authors and Inventors the exclusive Right to their respective Writings and Discoveries.

Here is what it has come to (from a piece by Patricia Cohen in today’s Times):

Art Is Long; Copyrights Can Even Be Longer

Filmmakers are not the only ones who sometimes run afoul of artists’ copyright law. In recent weeks Google Art Project, which just expanded its online collection of images to more than 30,000 works from 151 museums, agreed, because of copyright challenges, to remove 21 images it had posted.Artists’ copyright is frequently misunderstood. Even if a painting (or drawing or photograph) has been sold to a collector or a museum, in general, the artist or his heirs retain control of the original image for 70 years after the artist’s death.

Can someone explain how locking up these rights for 70 years after the creator has died is supposed to benefit society by spurring new creative efforts? How does it “promote the Progress of Science and the useful Arts”?

As an author, I am all for giving writers a temporary right to earn money from our creations. Without it, I might still write stuff like this, but I would not have written my book. So, a reasonable copyright is a good thing, in my book (and for my book!). But Picasso is not creating any new Demoiselles no matter how long his family gets to dine out on it.