What ails the Chinese economy? According to a recent story and column in the NYTimes, it’s a lack of confidence among Chinese consumers in the safety of the products — from baby formula to cars to pork — made in their own country. They lack confidence for good reasons, but they lack the means to do much about it other than smuggle in substitutes.

I would submit that one missing ingredient is a free press that could reveal the abuses, shortcuts, and shoddy practices that undermine Chinese products. In his column, Joe Nocera gave this idea a quick nod.

In the United States, of course, it has become religion among conservatives to denounce regulation, saying it stifles business and hinders economic growth. But consider: At the turn of the last century, America was as riddled with scam artists as China is today. Snake oil salesmen — literally — abounded. Food safety was a huge issue. In 1906, however, Upton Sinclair published “The Jungle,” his exposé-novel about the meatpacking industry. That book, pointed out Stanley Lubman, a longtime expert in Chinese law, in a recent blog post in The Wall Street Journal, is what propelled Theodore Roosevelt to propose the Food and Drug Administration. Which, in turn, reformed meat-processing — among many other things — and gave consumers confidence in the food they ate and the products they bought.

That is fine as far as it goes, but it’s a bit reductionist. The fact is, it took a sustained campaign by a lot of muckraking journalists to build public support for reform, and it took a political system that could (with sufficient effort) bring about change, and it took a political movement (Progressivism) that was poised to mobilize that public sentiment into electoral and legislative results.

Ironically, the same issue of the NYTimes has a roundabout confirmation of the virtue of regulation: the red-state folks who raise catfish are worried that Washington will fail to fund the federal office that oversees inspections of catfish. No inspectors, no public confidence, no sales. 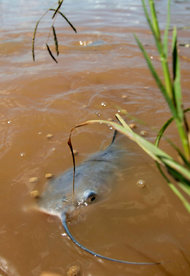