Having just returned from two weeks in China, I can confirm the point made in a story in today’s New York Times: China’s air is filthy. People routinely wear surgical masks just to avoid breathing in all the particulates. It feels like Pittsburgh or Manchester of the late 19th Century.

–China’s energy companies are as short-sighted as our own, lobbying to continue polluting the air. But at least on CCTV I did not see any ads touting the oxymoronic “clean coal.” Coal is coal, and coal is dirty. From today’s Times piece by Edward Wong:

Even as some officials push for tighter restrictions on pollutants, state-owned enterprises — especially China’s oil and power companies — have been putting profits ahead of health in working to outflank new rules, according to government data and interviews with people involved in policy negotiations.

–We in the States should be aware that China is subsidizing our own clean skies by putting up with the pollution that makes their products so cheap. Walmart and other retailers could not stock their shelves with such low-priced goods if China took the necessary steps to clear its own skies. If they really insisted on air that is as clean as that in the US or Europe, China would have to install scrubbers, switch to cleaner fuels, and invest in a lot of new greener technology. In that case, the price of manufacturing would go up, and we would have to pay a bit more for all the cheap stuff we import. Which would not be the worst thing.

Here’s a photo I took in Xi’an, a city of about 10 million in east-central China:

And here’s a Beijing sunrise: 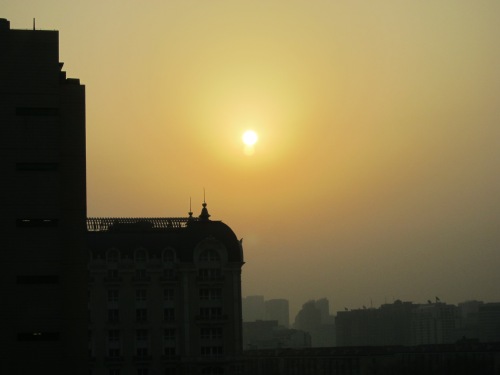 It really is that bad.