The market is trying to send a signal: the age of coal is over.

In today’s news, the headline is the decision by Peabody, the largest coal producer in the U.S., to file for bankruptcy. 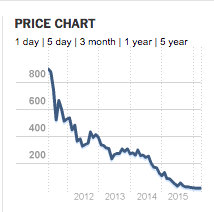 That step, combined with the recent prison sentence imposed on Massey’s top boss in pro-coal West Virginia, signals the collapse of coal as an economically viable fuel and the demise of coal as a political force in the states where it has long been a factor. (Are you listening Mitch McConnell?)

Those are the headlines. The trend they reflect is a decisive step away from burning carbon. There are now far more jobs in the U.S. in the emerging renewable-energy sector than in the moribund coal industry.

At the funeral, I’d like to hear “Paradise” by John Prine:

“Paradise”
When I was a child my family would travel
Down to Western Kentucky where my parents were born
And there’s a backwards old town that’s often remembered
So many times that my memories are worn.

[Chorus:]
And daddy won’t you take me back to Muhlenberg County
Down by the Green River where Paradise lay
Well, I’m sorry my son, but you’re too late in asking
Mister Peabody’s coal train has hauled it away

Well, sometimes we’d travel right down the Green River
To the abandoned old prison down by Airdrie Hill
Where the air smelled like snakes and we’d shoot with our pistols
But empty pop bottles was all we would kill.

Then the coal company came with the world’s largest shovel
And they tortured the timber and stripped all the land
Well, they dug for their coal till the land was forsaken
Then they wrote it all down as the progress of man.

When I die let my ashes float down the Green River
Let my soul roll on up to the Rochester dam
I’ll be halfway to Heaven with Paradise waitin’
Just five miles away from wherever I am.

One response to “This week in Fossil Fuels: Coal giant bankrupt”