This Week in Fossil Fuels

by Christopher B. Daly

In response to Norway’s decision to divest of coal-company stocks, some people detected an odor of hypocrisy, given off by Norway’s continued dependence on another fossil fuel: North Sea oil.

To which I say, Enh. Any step in the right direction is welcome.

–The oil industry is going through one of its chronic contractions.

HOUSTON – Pelted by the oil-market crash, the energy industry’s job cuts reached 150,000 by the end of May, says energy recruiting firm Swift Worldwide Resources, and that figure had grown by a fifth since March.

–The fracking industry acknowledges its image problems by launching a cute PR campaign. (How dumb do they think 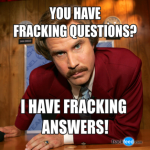 –If you are keeping track, here is a chart showing the value of a share of stock in Peabody Energy, one of the largest coal companies in the U.S. (Fun fact: the NYSE ticker symbol is BTU — i.e., British Thermal Units). To summarize, a share that was worth $16 a year ago is now worth $3.

That in itself is a reason to divest.

IN FACT, it is a really great reason to have divested a year ago! (What say you, Drew Faust?)