How much more evidence does anybody need that the NCAA is a deeply corrupting force on U.S. college campuses?

Especially among the big-time Division 1 schools, the NCAA tarnishes everything it touches. Lately, I have been avoiding/following the coverage of the most recent scandal at my beloved alma mater, The University of North Carolina-Chapel Hill (m.a., 1982). The proud flagship of the Carolina system, UNC-CH is a school with high ambitions — both academic and athletic. And that’s where the trouble starts.

In pursuit of the money and status associated with big-time televised college sports, UNC has chased ratings and championships for decades in men’s football, basketball, and lacrosse. Which raises the inevitable question: how can a college attract top-tier students who can also hack the academic requirements of a good school?

Which raises the inevitable answer: at least some of those athletes will manage it by getting a pass on their schoolwork. That, in turn, requires the active collaboration of coaches, deans, and professors who should know better. They are not serving those young athletic superstars by brooming them through school without actually learning anything. And they know it.

That’s the upshot of the scandal at UNC, which is detailed in a report by a former prosecutor, Kenneth L. Wainstein. Read the report here. It is a masterpiece of understatement.

Some of the coverage can be found here (an SI interview with the UNC athletic director, who is actually named “Bubba”)

If students want exercise, let them go run around on their own campuses.

If pro sports need farm systems to develop new pro athletes, let them pay for them (and pay the athletes). 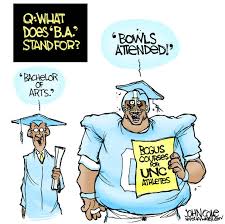 One response to “Abolish the NCAA: UNC edition”