Abolish the NCAA: The Duke case

I’m just catching up with a fine review by Caitlin Flanagan in the NYTimes Sunday Book Review about what sounds like a fine book by William D. Cohan about the fiasco that was the Duke lacrosse “scandal” of 2006. Without re-hashing the accusations or the ensuing rush to judgment, the issue raises the question:

What educational role does intercollegiate lacrosse play at Duke University?

I think the answer is pretty obvious.

It has become possible, these past several decades, to think of Duke as consisting of a professional basketball team to which, bizarrely, a research university has attached itself. But it is the “non­revenue” sports at Duke — and the school’s relentless, aggressive and very expensive campaign to build them into powerhouse brands — that have most radically changed the tenor of that campus. The strange centrality of the athletic program in the life of an academically excellent institution, and the many unintended consequences this situation has wrought, is the subject of William D. Cohan’s “The Price of Silence: The Duke Lacrosse Scandal, the Power of the Elite, and the Corruption of Our Great Universities.” The book is at once a masterwork of reporting and a devastating critique of a university that has lost its way.

. . . The ill-advised party that would end in the rape charges took place at the beginning of spring break, when the team was required to stay in Durham to practice. This forgoing of their vacation week had resulted in a new tradition in which players spent their off-hours partying, hard, in a kind of alternative spring break. At the beginning of the week, the coach came to practice with some $10,000 in cash, which he passed out to the players in fat wads. The absurd amount was ostensibly for meals, although many of the players were sons of wealthy families and could afford to buy their own chow. By that night, the cash was being spent on all the ancient vices: booze, gambling and the hiring of desperately poor women for sexual entertainment. The players chose to do all of these things, of course, and it was their responsibility to deal with any disastrous outcome that might result from them. But the way in which that huge pile of cash played its role in the events hangs over “The Price of Silence.” It raises the most disturbing questions about how Duke envisions its student-athletes, what it expects from them, how it is willing to accommodate them — and how it will drop them, completely, when they are no longer of use to the university. . . 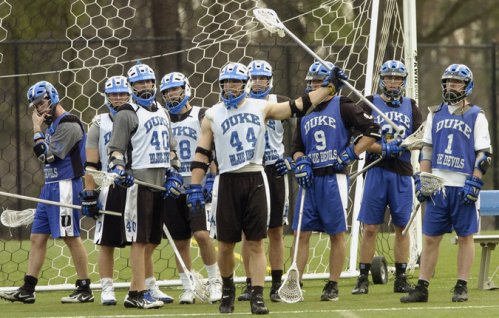 2 responses to “Abolish the NCAA: The Duke case”