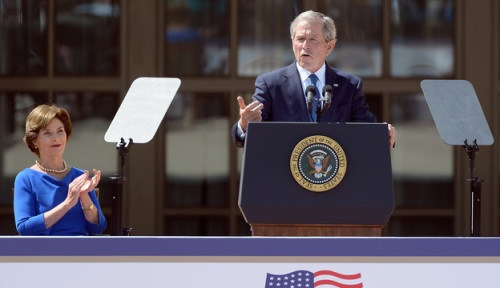 “Now, there are some who would like to rewrite history – revisionist historians is what I like to call them.” — George W. Bush

That’s the headline on a piece in the latest History News Network website, reporting the results of a flash poll of elite historians timed to coincide with this week’s opening of the new George W. Bush presidential library.

(Actually, it’s the George W. Bush Presidential Library and Museum, dedicated Thursday on the campus of the private religious school Southern Methodist University in Dallas. Like all 13 U.S. presidential library+museum complexes, it is administered by the National Archives and Records Administration. At all these operations, there is an inherent tension between the desire of the families and supporters to lionize our ex-presidents and the professional obligation of the NARA to preserve everything and make it all available to the public and to scholars.)

Back to the historians: they really can’t stand Bush, and they grade him about as harshly as possible. (Memo to future presidents: Invading the wrong country is never good for your reputation.)

The History News Network conducted an informal poll on Thursday asking American historians from the nation’s top research universities and liberal arts colleges to grade the presidency of George W. Bush on an A-F scale, based on fourteen different metrics, ranging from foreign policy to the economy to transparency and accountability.

Sixty-four historians responded. Thirty-five — over half — rated his presidency an outright failure.

“Thank you, God, for this opportunity,” one professor, a faculty member at one of the service academies, wrote in a comment. “He was not qualified to be president and it showed for eight long years.”

GEORGE BUSH: History will ultimately judge the decisions that were made for Iraq. And I’m just not going to be around to see the final verdict.

KING: Not going to be around. That’s an interesting way to put it. You…

GEORGE BUSH (laughing): In other words, I’ll be dead….

Bush said something similar when he was asked a similar question by Bob Woodward in late 2003. Asked by Woodward about how history would judge Bush’s decision to invade Iraq, Bush said: “History. We don’t know. We’ll all be dead.”

Here’s the Bush report card from the top historians:

Respondents were asked to grade President Bush on the following metrics (the average letter grade accompanies each metric) and provide justifications for their marks:

One response to ““Historians Still Despite George W. Bush””