When the news is wrong (for a stupid reason) 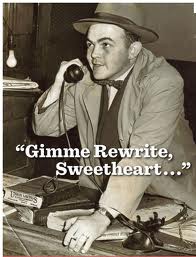 As many have observed, several front-line news organizations reported incorrectly on Wednesday afternoon that authorities had “arrested” or “taken into custody” a suspect in the Boston marathon bombing. As someone who spent 10 years working for The Associated Press (where our watchword was always, “Get it first, but get it right”), I feel bad for journalists who are chasing leads in the investigation into the bombing case. They are under tremendous pressure to advance the story, “break” news, and stand out from the crowd.

I feel bad for them, but that’s not my only response. I also feel appalled at the news media’s chronic inability to exercise restraint. As the afternoon unfolded, I had a sickening sense of deja vu: here we go again, with the race to be first.

But, first with what, exactly? If the cops or the FBI had really made an arrest, they were going to announce it — and quickly. So, what difference does it make if I find that out at 2:30 or 2:45 or 4:00? Is my life any better?

Besides, it’s not as if this is the kind of news that authorities try to hide. When they nab a bad guy, they’re proud of it. They want to stand there at the press conference (ties all straight, uniform gleaming) and take a turn at the podium to say the same clipped phrases they always say. Sure, that’s important, and someone should be there to report it. But we do not need an entire army of reporters trying to get this information first. The mania for being first upsets and erodes all other journalistic priorities.

This kind of frenzy for “scoops” is essentially a waste of journalistic resources and enterprise. There are many fine, experienced, tough reporters and photographers in Boston this week. They should not waste their time trying to surf a few feet ahead of the cops in pursuit of factual information that is going to be divulged anyway. This is particularly true when reporters get in the way: if journalists report, for example, that an arrest is “imminent,” doesn’t that tell the bad guys that it’s time to flee?

In fact, I don’t consider that kind of reporting a “scoop” at all. Real news consists of information that someone is trying to hide or that would not come to light unless an individual journalist gets out and gathers information and connects some dots. Reporters make a contribution to society when they generate information that we would not have otherwise.

So, get out there and find a real, true story — and tell me something I don’t know and that won’t be announced from a podium.

We can do better.