This column by James B. Stewart in today’s Times is a good example of the power of using research. When journalists avail themselves of expertise and data, they can get past myths, slogans, and he-said/she said. In the column, Stewart examines the claim that rich people move to avoid income taxes. That claim, a favorite of tax-cutters, is an assertion that should be testable by facts. Turns out, it has been tested — multiple times — by social scientists. What did they find?

It turns out that a large majority of people move for far more compelling reasons, like jobs, the cost of housing, family ties or a warmer climate. At least three recent academic studies have demonstrated that the number of people who move for tax reasons is negligible, even among the wealthy.

Cristobal Young, an assistant professor of sociology at Stanford, studied the effects of recent tax increases in New Jersey and California.

“It’s very clear that, over all, modest changes in top tax rates do not affect millionaire migration,” he told me this week. “Neither tax increases nor tax cuts on the rich have affected their migration rates.”

The notion of tax flight “is almost entirely bogus — it’s a myth,” said Jon Shure, director of state fiscal studies at the Center on Budget and Policy Priorities, a nonprofit research group in Washington. “The anecdotal coverage makes it seem like people are leaving in droves because of high taxes. They’re not. There are a lot of low-tax states, and you don’t see millionaires flocking there.”

Despite the allure of low taxes, Mr. Depardieu hasn’t been seen in Russia since picking up his passport and seems to be hedging his bets by maintaining a residence in Belgium. Meanwhile, Russian billionaires are snapping up trophy properties in high-tax London, New York and Beverly Hills, Calif.

“I don’t hear about many billionaires moving to Moscow,” said Robert Tannenwald, a lecturer in economic policy at Brandeis University and former Federal Reserve economist.

Far too often, journalists fall for the anecdote, such as the noisy departure of Gerard Depardieu from high-tax France. 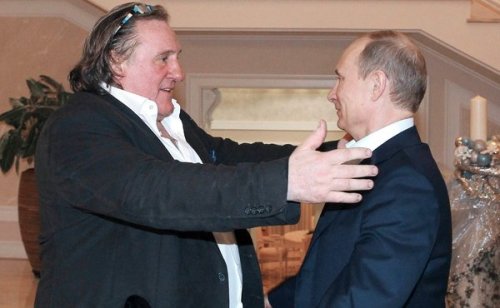 (pool photo)
GD embraces Putin, leader of his “adoptive” country — or is he evaluating Putin as a possible hors d’oeuvre?

Or else, they repeat the assertion unexamined, or “balance” it with an offsetting comment by someone from the other side.

5 responses to “Using research in journalism”