I don’t usually take frankly partisan positions in this blog, and I will try not to do that here, even in the midst of the Iowa caucus-ing.

What struck me in the last few days was the lament of Newt Gingrich about the flamethrower approach of the Romney camp, which has bombarded Gingrich with negative TV ads. For a Republican to complain about unrestricted negative campaigning is more than a bit rich. It’s like Dr. Frankenstein complaining about his monster.

Questions for the media to keep in mind:

1. Who elevated the dark art of negative campaigning to its highest level?

2. Who thought is was a good idea to allow unrestricted spending on political ads?

In other words, the answer to both questions is REPUBLICANS. To the best of my knowledge, no mainstream media accounts of this election have mentioned this factual matter of background. I would say that reporters and editors should give this some thought. How will the media address this reality? Will journalists explain the factual history of the issue? Will they try to find a way to neutralize or offset it? Will television station owners in Iowa, New Hampshire, South Carolina and elsewhere reject those ads? Will the media interpret non-partisanship to mean that they must look the other way? 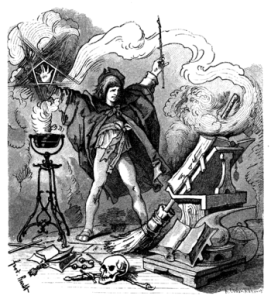 [Illustration of the Goethe figure the Sorcerer’s Apprentice by S. Barth, via Wikimedia]