Among all the countries in the world, only a handful maintain military bases outside their own territory. With the exception of one country, those external bases number about 30.

The exception? The United States, of course.

How exceptional are we? We have 686 bases overseas. That’s more than 20 times more than the rest of the world combined.

Yes, they help maintain world peace — sort of, I guess. And yes, they facilitate world trade, I suppose.

But according to a new book, Base Nation: How U.S. Military Bases Abroad Harm America and the World, there is a huge intangible downside to all those bases. They encourage U.S. military adventures, and they generate a huge amount of ill-will toward America.

While you’re thinking about that, ponder this Defense Department map: 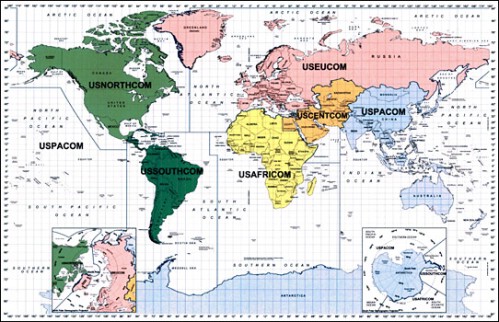 Each one of those regions has a commander, and I would assume that each of those commanders has the ambition to make his bones by achieving some military objective. From the North Pole to the South Pole, from Mexico to Malaysia, we are ready to do something to just about everybody, everywhere, all the time.